The most iconic TV homes — and how to get the look

From the Golden Girls’ retro Florida bungalow to Monica and Rachel’s suspiciously large New York City apartment, the fictional spaces we know and love on the small screen can have a huge impact on the way we decorate our real spaces.

To find out more about the most popular TV homes and how they’re influencing interior design decisions, we launched a survey of 2,000 Americans in conjunction with OnePoll. Plus, we chatted with our in-house interior design expert Chandra Borek who shared her best tips and tricks for incorporating your favorite TV home style in your own space.

Here are our findings:

If you’ve ever found yourself admiring the living room setup of your favorite onscreen characters instead of their latest storyline, you’re not alone. A whopping two in three respondents say they pay close attention to the background decor of their favorite TV shows.

Maybe you’re drooling over the exposed brick in a fictional LA loft, the grand Victorian-style fireplace from a period drama, or a curvy, statement-making sofa your favorite character seems to live on. While definitely fun to admire, the TV show design moments that distract you from the main plot points can also tell you a lot about your own style.

“Define your own style by paying attention to the TV interiors you love the most,” Chandra recommends. “Try to break these spaces down to what components you are most attracted to. Is it the color of the space? The metal accents? The use of texture? Once you start to understand why you love the style of certain TV backdrops and sets, it becomes easier to bring this inspiration into your own home.”

For example, if you’re someone who loves the Golden Girls’ Florida home, you’re probably into the relaxed look and feel of boho style.

“The Golden Girls’ home features a lot of rattan and bamboo, which is super on-trend right now,” Chandra shares. “If you’re a fan, you can pull together a Golden Girls’ inspired look with pieces like the Sol Daybed, Catta Natural Side Table, or the Livia Lounge Chair.” The woven natural wicker Catta Side Table brings a touch of that Golden Girls’ boho style to any space — without a major commitment.

It’s official: The most-loved TV home is located in Bel-Air

When Will Smith’s character left West Philadelphia (born and raised), he moved into what we can now officially call the most-loved TV home. After polling our survey participants with a selection of iconic TV homes, 36 percent chose the ‘90s mansion from The Fresh Prince of Bel-Air as their favorite.

And who wouldn’t? This TV home became a character itself as the setting for the show’s most pivotal and meaningful scenes. Built in 1937, the architectural style of the home is described as “L.A.-neoclassical-with-a-touch-of-Colonial-and-a-dash-of-Greek-Revival.” While most of season one took place in the formal living room, from season two onwards a more casual open kitchen and family room became center stage. With a light and soothing color palette, soft furnishings, and personal decor touches and accessories, the Fresh Prince mansion has a lot in common with current and emerging design trends.

“Like other ‘90s throwbacks that are trending today, it’s no surprise that Americans are turning to the Fresh Prince of Bel-Air for decor inspiration,” explains Chandra. “Its exterior is inspired by Georgian and Neoclassical architecture that’s paired with a white oak and neutral palette interior, to make it feel relevant. Soft tactile fabrics, curved forms and furniture, and classical architectural elements are all staples of this look, which we’re seeing trend in home decor today.”

To bring some of that Fresh Prince style into your own home, Chandra recommends incorporating pieces like the Abisko Quartz White Sofa, the Hira Rug, or the Beta Modular Sofa. With some curvy edges and the tone-on-tone neutral hues, these pieces bring back the soft and soothing comfort of the ‘90s — in a good way. Bring the Fresh Prince of Bel Air’s interior design style into your own space with the soft neutrals and curved edges of the Abisko Sofa or Abisko Sectional (shown).

Other popular TV set homes respondents would happily move into include The Big Bang Theory’s Pasadena apartment (29 percent), the house from The Brady Bunch (28 percent), and any of the luxe apartments from Sex and the City (19 percent).

The most coveted TV furniture piece? 35% of people say the Central Perk sofa from Friends

We’ve all seen furniture or decor on a TV show that we just had to have. If given an opportunity to own any piece of television set decor, 35 percent of survey respondents have the Central Perk Sofa from Friends at the top of their wish list. From being featured in the opening credits to its recurring role as the central gathering spot for a group of young pals, the plush orange sofa has secured its spot as an iconic piece of TV prop history.

While its physical features include rolled arms, a plush tufted back, and a retro orange hue, we believe the sofa’s staying power has everything to do with its purpose and role in the characters’ lives. The sofa offered the group of friends a dedicated spot where they could catch up, share in each others’ lives, and make lasting memories.

“The Central Perk Sofa is a piece where people are coming together, so it makes sense that this was a popular choice,” Chandra explains. “There are natural feel-good vibes around a piece like that — plus velvet is really on-trend at the moment. Over the last few years, people have started seeking comfort through their furnishings so soft textures such as velvet, along with bright colors that bring joy, are all seeing a huge resurgence.” If looking to add a bit of this vivid velvet to your space, our Makeva Chair definitely does the trick.

Another fan favorite? 29 percent of respondents said that they love the dining set from The Golden Girls. Just like with the Friends sofa, The Golden Girls dining set represents the quality time the four characters spend together as they come together to share their heartaches, laughter, and that spicy Golden Girls gossip.

“People tend to focus on elements that relate to their own lifestyles and values,” Chandra explains. “If you love to entertain, you’re going to focus on a dining table like the Seno. If your family loves coming together over movie night, you’ll want to invest in a soft, comfortable sofa like the Sven Pacific Blue Sofa. It all comes down to what’s most important to you — and where you spend your time.” 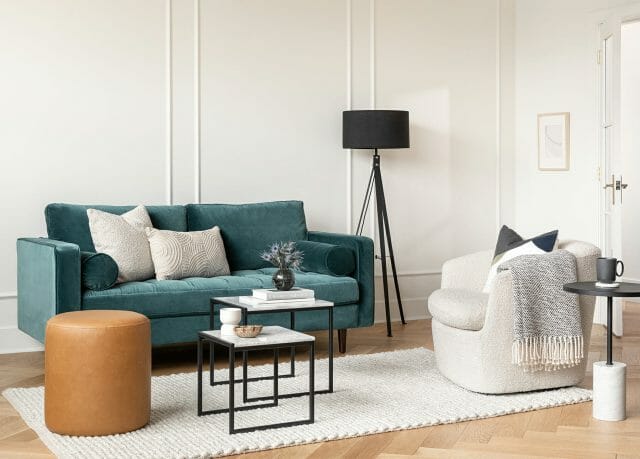 Looking for a vibrantly-colored velvet sofa of your own? The Sven Pacific Blue Sofa brings a Friend-ly feel to your own living room.

Only One Percent of Respondents Think Bigger is Always Better

While the properties featured on Netflix’s hit show Selling Sunset are undoubtedly impressive, we found it interesting that just one percent of survey respondents said they were inspired by those Los Angeles mansions.

Flashy features, multi-million dollar price tags, and all of the glitz and glam can’t seem to compete with homes that feel more realistic, attainable, and personable to viewers.

“Modern houses, like those shown on Selling Sunset, often have a lot of hard surfaces like concrete, quartz, and tile, which can make them feel sterile and not lived-in,” Chandra says. “Because of this, it’s important to layer in texture in the form of throw pillows and rugs like the Upsa.” 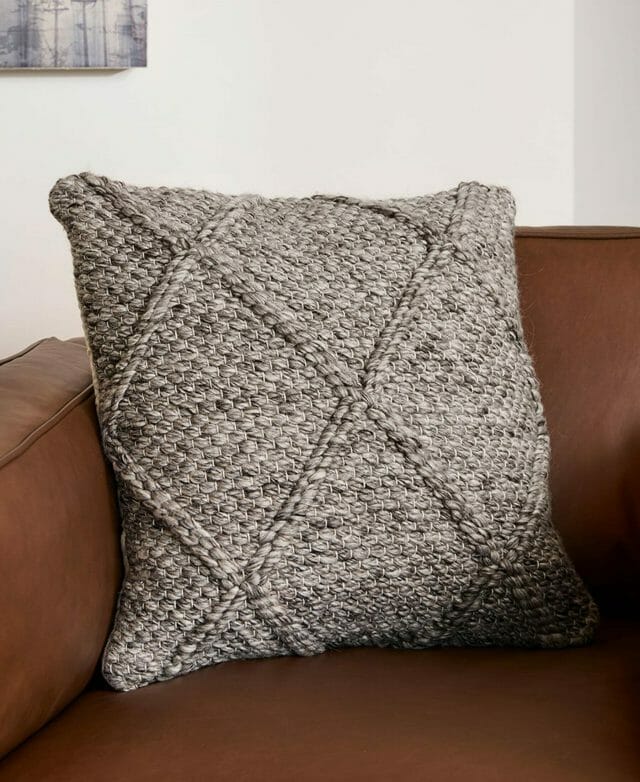 Add some warmth to an ultra-modern space with a throw cushion like the hand-knit Criss Pillow.

Another major thing those Selling Sunset mansions were missing? Personality.

“Those homes have been staged to remove any trace of the homeowners’ life with the goal of a sale, but this means viewers won’t feel the same connection to these spaces,” Chandra explains. “Create a home you’ll love by incorporating meaningful touches such as objects from your travels, art that has a personal connection, and pieces that tell your story.”

According to our survey, the average American makes small improvements to their home every five months. Thankfully, eighty-four percent of them say they feel a “sense of joy” when doing so. In turning to your favorite TV show homes, you can discover the spaces that bring you joy, the styles you’re naturally attracted to, and find inspiration when it comes to designing your very own home.

“Like TV seasons, styles change over time so it’s no wonder that Americans are making small home improvements every five months,” Chandra shares. “Article makes it easy to create a beautiful modern space whether you’re incorporating the TV trend of the moment — or looking for your new timeless furniture favorites.”

Here’s a complete breakdown of the results:

Which TV house would you love to live in?

Which TV show from the past year most inspired your interior style?

Agree or disagree: When watching TV shows, I pay close attention to the decor.

Which TV show features the most stylish furniture?

Which piece of furniture from a TV show would you want in your own home?

Which TV show character would you want to have as a roommate?

Agree or disagree: My home is nice enough to be used as a set for a TV show?

Agree or disagree: Among all of my friends, I have the nicest home.

How often do you make small improvements to your home?

Agree or disagree: I feel joy when I make small improvements to my home.

From Day to Night: The Best Sleeper Sofas & Daybeds

A Dining Table for Every Occasion